This is the final entry for my London Book Fair 2013 journal. 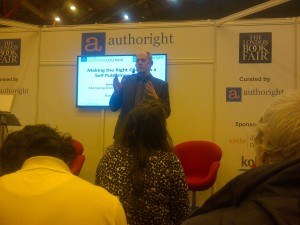 This day was very interesting as I met a couple of people whose path I suspect I’ll likely cross again. We’ll see….

I had to admit that when I got home on Tuesday, my head was throbbing with all the info I had gotten plus the fact that I had stood up for about 2 or more hours. I had to attend to some personal matters in the morning and subsequently ended up arriving at Earls Court just after 2 o’clock.

I was surprised I found a seat for the ‘Making the Right Choice as a Self Publishing Author.’ I guess some people were still recovering in their hotel rooms. Actually what happened was that as soon as I got there, a lady seating on the second row got up.

I loved Jeremy Thompson’s (Managing Director at Troubador Publishing) presentation. He was very straight forward and said what the current situation in the marketplace was. He also highlighted what services his company could offer and peppered his presentation with a few stories. It did get me thinking about using them to publish my books as I’m not impressed with the quality of CreateSpace books. Not to say CreateSpace is bad but they offer a one size fits all and especially with children’s books, you want to aim for something eye-catching and oozing quality. I was torn between going to visit various stands or stay for the next session. I’m glad I chose the latter.

It was a Q&A chaired by Gareth Howard and Hayley Radford. 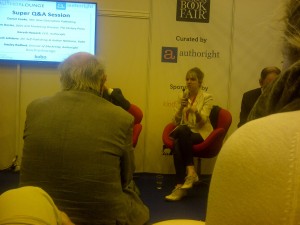 The special guests on the panel were Daniel Cooke from Generation Publishing and Mark Lefebvre from Kobo. As an industry insider, Daniel said he really couldn’t see physical books being done away with. Hayley gave useful advice on approaching a literary agent or publisher.

Gareth gave some advice regarding contracts. Even though he is a lawyer by profession, he gave an example of not knowing the legal or economic implications of a client of his who was negotiating passing on the translation rights of his book to another party. This is where a literary agent is very necessary as they understand the market and can fight your corner for you. He also talked about how the job of his company was to hound (professionally) journalists to read and review a book. As an author, it wouldn’t really be in good taste to hound a journalist as they’ll hate you. However, a third party doing this is okay as the journalist understands they’re just doing a job.

Mark encouraged us to publish our books on all platforms. I can see where he’s coming from with that advice but honestly and from my experience, I think the other self publishing platforms like B&N, Kobo, iBooks etc., really need to offer an enticing package to authors that will attract them away from Amazon’s KDP platform. Until they do so, it just makes pure economic sense to stay with KDP.

There was a drinks session after this seminar as it was the last seminar at the AuthorLounge area. While waiting to ask Hayley Radford a question, I noticed this lady with a badge that had ‘My Little Big Town’ on it.

I approached her and asked if she was affiliated with them and she said YES! Beth Dexter-Smith  then proceeded to show me a physical copy of her book, ‘Where’s The Scone,’ which she just saw for the first time that day. I told her I had been to and meet the folks at MLBT. She said she had approached Calvin the year before at the Author Lounge when authors where allowed to pitch their ideas to publishers and a year later…bam! She has a published book that will be sold in all the major retail stores very soon. (As I write, I can see that the book is now available to buy on the Waterstones and WH Smith websites…that is huge!).  She encouraged me to go to the MLBT stand one more time and it was nice to do that as I got the opportunity to take pictures with Calvin, Letitia and Beth. Calvin was a kind to sign a copy of Gorgeous George and the Giant Geriatric Generator which he illustrated and was written by Stuart Reid. I’m almost through reading it and will likely do a post about it later.

I went back to AuthorLounge and had the opportunity to speak to Hayley. She informed me of a new website I believe she’s starting that will marry agents with authors – litfactor.com. thereafter, I made my way out of the hall and into the London evening sunshine.

All in all, these last 3 days were a blast! I got to meet some really wonderful people, learned some valuable stuff and got a peek into the publishing world. Over the next coming months I’ll be implementing what I learned at the event. Can’t wait to attend LBF 2014!