Its Author Interview Thursday! I’m super excited about today’s guest because I met her at the London Book Fair and her story is one that personally inspired me a lot.

I have to admit that it was serendipitous the way we met and I know I’ll be cheering her every move as she’s very talented and has some interesting projects in the pipeline. You can read my London Book Fair – Wednesday post to see how I met Beth Dexter-Smith. Her recently published book is now available in big UK retailers like Waterstones and WH Smith. Please join me in welcoming Beth.

Tell us about your latest book and what format is it available in?

‘Where’s the Scone?’ is a soft backed pre-school counting book that involves lots of weird and wonderful animals eating wacky food such as 5 yeti sucking spaghetti! There’s also a list of items in the back of the book that have been hidden within the illustrations that children can look for when they’re reading the book. It’s available from WHSmith’s, Waterstones and Amazon’s on-line shops.

What can a reader expect when they pick up a Beth Dexter-Smith book?

Strong characters, an original take on a traditional theme and humour!

What do you love best about being a children’s book author?

Having an excuse to write about things that entertain me and seeing the expression on childrens’ faces when they enjoy something I’ve written.

Where do you usually write your books?

On a sunny sofa looking over my garden.

What is the process from when you get an idea for a book to the point it gets published?

I normally think about an idea for a week or two and let it ferment so that when I put pen to paper I have become consumed by the idea and don’t normally stop writing until I have a completed draft. I then read it to my husband and children before making any tweaks that I think are necessary. My publisher uses his contacts in schools to get feedback from parents and children to inform any further changes. In ‘Where’s the Scone’ for example I had ‘deer swilling beer’ which was changed to ‘bees nibbling cheese’ following such feedback. My publisher then produces the illustrations which we develop together to make sure that the pictures marry up well with the text and then when we’re both happy, a small number of books are produced. These are used to obtain pre-orders; the number of which will inform the final print run.

Absolutely-it’s the result of self-imposed pressure to keep producing great ideas. I tend not to write for a while and let my ideas build up and then I have a period of time when I’m quite productive and write quite a lot. When I’m writing I can’t read other books as I find this too distracting and I always try to jot down any ideas I get, however small and undeveloped, as my memory is abysmal!

What were some of your favourite books as a kid?

The Borrowers, Anne of Green Gables and anything by Enid Blyton

Congratulations Beth on recently publishing your first book. Can you describe to us that moment when you held your book in your hands for the first time?

It was very surreal. It took a year exactly to get the book (I met my publisher at the 2012 London Book Fair and he gave me my book at the 2013 LBF) and there were a few times along the way when I thought it might not happen so my overriding feeling was one of relief. It was later that week when it finally sank in that I was a published author and the excitement and pride came when I started showing my book to my family and friends.

What mistake(s) have you made while publishing your latest book that you would advise other authors against?

The process of working with my publisher was very collaborative and I don’t feel that any mistakes made. I initially thought that the book might work better as a board book but it forms part of a pre-school series that My Little Big Town has produced and they look great together.

There is a big debate going on about the virtues of self publishing versus traditional publishing. What’s your take on this debate?

I think most authors would opt for traditional publishing because it’s like getting a vote of confidence from the industry. There is less financial exposure for the author and one assumes that the publishing house will have the resources and contacts to illustrate, produce and market the finished book more effectively than a sole trading author. That said there have been many examples over the last few years of self-published books that have been huge; ’50 Shades of Grey’ which started life as free download being a perfect example. The beauty of self-publishing is that it allows books to be produced that take more risks than the conventional publishing industry which, in my opinion, is far too conservative.

Toy Story-I have a soft spot for Mr Potato Head!

Which are scarier, dragons or monsters?

Dragons. Monsters are always drawn to look too fluffy and cutesy in childrens’ books which annoys me. Children love to be frightened and I think we try to mollycoddle them too much.

What are your best memories from your childhood?

Walking on the moors, holidays with the Lewises (great family friends), playing in the woods and having the time to daydream.

What is a typical day for Beth Dexter-Smith?

I stay in bed for as long and then have a manic rush to get my children to school/childcare before starting work at the North York Moors National Park. On a non-working day mornings are spent taking the children to various activities and then in the afternoon we’ll head off in the camper-van onto the moors, go out on the bikes or see friends. I love pottering in the garden and cake so I will jump at the chance to visit any establishment that sells plants and buns! We have a great walled garden in Helmsley that is fantastic on both fronts!

Have your children inspired any of the characters you’ve written about?

Yes. I was really shocked at how adverts and many traditional fairytales condition girls into thinking that their sole purpose in being is to look pretty and find a husband. Julia Donaldson is very good at making her lead characters female but I really wanted to create a strong role model for young girls like my daughter which is where Stud Metal Mary the Rock n Roll Fairy came from.

What can we expect from Beth Dexter-Smith in 2013? 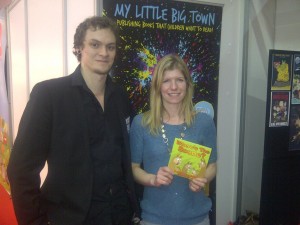 Stud Metal Mary the Rock n Roll Fairy is due out later in the year and I’m currently working on a sequel which I’m hoping my publisher will take forward.

Any advice for authors out there who would like to get their books traditionally published?

Do listen to constructive criticism and try not to be too precious about your work then go to the London Book Fair and make the effort to approach publishers and agents and sell your work. Don’t be shy-it’s a difficult thing to do and you’ll probably have several rejections but don’t give up. Many of the best known authors were rejected more than 10 times before they found a publisher willing to take them on. Good luck!

Thank you so much Beth for taking the time to be with us this Thursday. You know a lot of people are afraid of rejections and allow it to stop them from even getting on the starting line. I admire the fact that you went to the London Book Fair with the sole intention of getting a book deal and almost a year to the day, you’re back at LBF but as a published author whose books will be sold nationally and internationally. Dreams really can come true if we just believe! You can find out more about Beth by visiting her Facebook page at the link below.