Go where you are celebrated and not tolerated.

Last week I was at the London Book Fair from Monday to Wednesday and I have to say every moment spent there was worth it. Writers tend to work in isolation so its always a big deal when you’re able to leave your cave and smell some fresh air. The London Book Fair was held at the world famous Earl’s Court in West London. Prior to the event I had mapped out my itinerary for the 3-day event which included seminars and workshops I wanted to attend as well as stands I wanted to visit. Over the next 3 days, I’ll share what I was up to and what I learned from this eye opening event. Today, we’re going to be looking at what I learnt last Monday.

It all kicked off for me with a Q&A session with Mel Sherratt and T.J. Cooke which was hosted by Daniel Cooper, the head of Kindle Direct publishing, EU. Both authors shared their routes to getting published and it was particularly encouraging for me when Mel said she was sat in the audience at last year’s fair and today she’s a best-selling author. 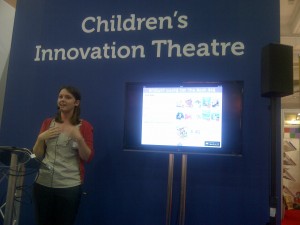 After this seminar, I had to rush over to the Children’s innovation theatre on another part of the hall (it must have taken like 3-5 minutes) where I had the pleasure to hear Stuart Reid do a session titled ‘Monster, Bums, Bogeys & Books that Children WANT to read…’

Stuart made a very interesting point that while your avid child reader will read the classic stuff like Enid Blyton and any other material, two-thirds of children, particularly boys need to be coerced into reading by giving them want they want to read..fun and gross stuff!

After the seminar, I had an opportunity to talk to Stuart and tell him about my writing efforts. He advised that one of the things that’s really worked for him was going to schools to do readings…so this is something I’ll be actively trying to incorporate into my publishing efforts in the next few months. Stuart has several published books and his publisher was actually at the Fair so he pointed me in their direction.

It was  a pleasure going to the My Big Little Town stand. In a funny kind of way, meeting Letitia (Sales Director at MLBT) and Calvin (El Presidente of MLBT) was possibly the fondest memory I’ll have of LBF 2013. 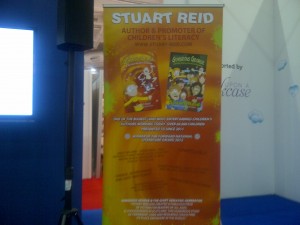 I met Rowan Gibson whose an author at MLBT and just had her début book – Pirates Don’t Play Cricket on full display. Rowan told me a personal story of how she got to write this book with Iain O’Brien (a famous New Zealand Cricketer). I have to say I was really impressed with the artwork and quality of the book. Rowan was dressed as a pirate and it was clear to see she was proud of her book.

I spent lunch time going to the different stands and speaking to the people at each stand. I do have to say that it seemed everyone had their agenda and it wasn’t really to meet new authors or sell books. As I discovered over the course of the Fair, many publishers and industry heavy weight were there to do deals. I went to an event on Tuesday afternoon, where the big publishing houses were pitching their Christmas launch books at booksellers. Jeff Kinney’s latest Diary of a Wimpy Kid was promoted at this event even though its launch date is all the way in November! I began to appreciate how strategic the publishing industry is. More about this event tomorrow.

In the afternoon, my goal was to attend a session at the Children’s innovation Theatre. However by 1.05 pm, the technical folks were still messing about with the sound system, so I picked up my bag and headed towards the AuthorLounge (the place to be at LBF). Patrick Brown, Director of Community at Goodreads was doing a session on how best to use the site. 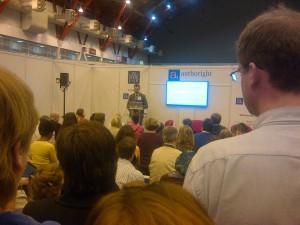 He shared some good practice stuff that I’ll definitely be implementing. He showed examples of authors who had used the power of Goodreads to increase the exposure of their books. If you look towards the  right of this webpage, you’ll see all my books and their ratings as listed on Goodreads. I’m definitely going to be spending more time there. Goodreads is a social platform where authors and readers can share and discuss books.

After this session on Goodreads, I quickly found a seat (standing up for almost an hour is so not fun) for the next event titled ‘How to Get a Litereary Agent’ The role of an agent is almost similar to that of an estate agent  as they exist to marry you with the appropriate publishing house. After this class, I visited the Amazon KDP stand and spoke to a lady called Amanda who answered some of my questions. She gave me her card and said to forward a particular query I had with regard to placing books in a certain category and she would forward it to the appropriate person. I sent her an email last Wednesday and if she does come through… Billy will become accessible to more children. Will keep you posted on that one. I checked out some other stands and was on my merry way.

I met a lady Liberian from Nigeria who was interested in show casing my work in her city. 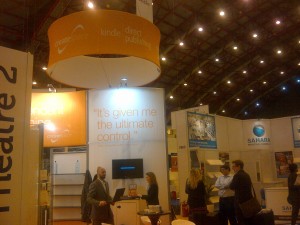 We agreed to meet up on Tuesday but sadly it never got to happen. Anyway, thank God for email! I’ll send her an email and will see that takes us.

My big take from Monday was it does pay to get out there and speak to people and find out what’s happening in the industry. You could sit at home and subscribe to newsletters and join forums and read people’s tweets but nothing can compare to actually seeing movers and shakers in the flesh and getting to hear things first hand.

Tune in for tomorrow’s post and discover why I walked out of one seminar.

Filed Under: On My Mind
← Interview With Children’s Book Author Marta Alexander
Win a SIGNED Copy of Billy and the Monster who Loved to Fart →