It’s another Author Interview Thursday and I hope you’re ready to be inspired and discover something new from our featured author. In the hot seat today is a lady whose probably better known for her musical talents. 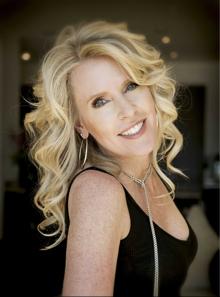 She’s a Billboard Top 40 Artist and has had her songs played on radio stations in most Western countries. She’s rubbed shoulders with quite a few people of influence but always has time to leave a positive influence on the few or many who enter her presence. Her foray into publishing her first children’s book is quite interesting and I’m so happy she’s taken the time to speak with us today. Ladies and gentlemen, please join me in welcoming Kim Cameron.

Can you tell us a little bit about yourself and what got you started writing?

I began writing as a TV journalist.  I wrote some copy when I worked as a radio personality, but that was mainly for commercials.  I started out as a small town TV reporter when I wrote on air copy.  After moving to the east coast, I began writing press releases and other marketing copy for the Smithsonian.  When I began my original music project, (Side FX), I got inspired to write my first story, which was a musical.  At the same time, the Examiner asked me to write about the DC music scene. Last fall, however, my inspiration for Seaper Powers was conceived. While on my band tour in the Caribbean, I met a 12 year old, who had a fascination with octopi.  For some reason it intrigued both me and my guitar player.  We ended up writing a children’s song the next afternoon called, “Mr. Octopus.”  My guitar player and I had no idea what we were going to do with a children’s song, but after a few discussions, he asked if I would write a story around the song. Given our love of music and all things audio, we decided to make the story into an audiobook.  We wanted it to be something kids could download and listen on their iPods while they were on their summer vacations. It turned out to be a lot more work then we ever thought, but I am pretty happy with the outcome.

What can a reader expect when they pick up a Kim Cameron book?

I always try to make sure there is a moral to the story. I am a big super hero fan, and I believe there is a little bit of hero in all of us.  I also want books to take you some place you had never been.

Oh yes!  I am not sure I know the exact remedy, but I do find escaping to sea hugging towns seem to break my block.  I suspect climbing a mountain might as well, but those are harder to get to for the most part.

What has been your most successful marketing method for promoting your books? 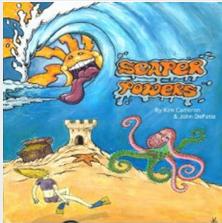 Right now, my music fan base.  Everyone either has a kid, or has friends with kids, and people, in general like to see kids involved in books or activities that do not involve TV and texting, so my fans have been great in getting out the word.

What were some of your favorite books as a child?

Green Eggs and Ham and Cat in the Hat were my two favorites when I was super young.  As I got a little older, Go Ask Alice and Nancy Drew.

What mistake(s) have you made while publishing your books that you would advise other authors against?

Do not settle for one medium.  We started out just as audio, and quickly learned there was a real need for hard cover.  Now, with CreateSpace, indie authors can offer both. I should have had them all ready at once, but it took a couple months to get there.

Anybody who knows Kim Cameron knows that she loves music. Can you tell us about any songs you’re working on at the moment or gigs you’re preparing for?

There are two super cool events coming up.  One is my EP release party in NYC on August 14 at the XVI Rooftop.  There will be a ton of fashion designers, actors and fellow musicians, so it should be an amazing party. The second is a private event, but it takes place in London at this old, grand club.  While I have been to London several times, never as a performer. I love firsts.

In 2011, you sang the National Anthem for the Washington Redskins in their home stadium. Can you tell us how that came about and what it felt like standing on the 50-yard line with thousands watching and singing with you? 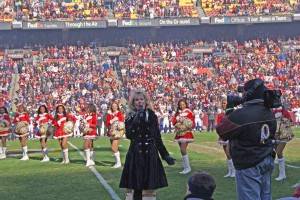 That is still my single most memorable gig.  My agent secured that one by talking to the Redskins’ owner. I was terrified, excited, and star struck all at the same time.  You never really understand how big the field is until you are standing on it.  And of course, the football players are enormous compared to me down there.  I loved every single minute.

What gives you more of a buzz, recording in the studio or before an audience?

That is always a hard question to answer.  When I am in the studio, I get high from all the creativity seeping through the walls.  But, on stage, I turn into a different person…so I have been told.  Almost like I am in a bubble where nothing can hurt or stop me.  It’s the best rush.

What was the last film you saw and what did you like about it?

Lone Ranger…. and loved it.  Such a tongue in cheek movie, and Johnny Depp (my ongoing crush) steals the show.  I loved that they took the story totally differently then the original concept.

What can we expect from Kim Cameron in 2013?

Well, I hope to finish Seaper Powers the sequel and announce a Caribbean tour. I was going to put songwriting on hold, but I just got a call last week…. so it looks like that is back on the table as well.

Where can fans and readers of your books discover more about you and connect with you?

SideFXMusic.com is the best place.  We update it daily and even have our daily twitter feed on the front page.

Any advice for authors out there who are either just starting out or getting frustrated with the publishing industry?

Keep writing.  Don’t throw anything away.  Just put it down for a while.  Talk to a friend about it, and come back to it when you are ready.  With all the new digital devices, people are consuming books, articles, whatever, like crazy.  There is a market out there.

Thanks for being with us today Kim and revealing the genesis of Seaper Powers plus an insight into who Kim Cameron is. I can personally testify to your last point about never throwing anything away as I recently found a short story I did about four years ago that’s going to be published in the next few weeks. You can discover more about Kim’s up to by following her on twitter with the twitter handle @sidefxband. Below is a trailer for Kim’s children’s book Seaper Powers

Filed Under: Author Interview
← Interview with Travel Writer Savannah Grace
Has Amazon Fallen out of Love with Indie Authors? →