On Monday, I posted the first part of my London Book Fair 2013 entry. I’ve been getting a few questions and comments around LBF 2013. 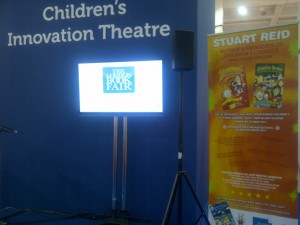 I can’t say it enough, it was a real eye opener and possibly a landmark point in my publishing/writing journey. Below is the major gist of what happened on Tuesday. Enjoy.

On Tuesday, I dropped my daughter off at school and I was on my merry way to Bush Hill Park station to grab a train into Central London. I started the day at the Children’s Innovation Theater with a seminar called ‘The Digital Generation: The Future of Children’s Story Time.’ This was done in a Q&A format. One of the speakers was a children’s book author who seemed to look down on self published authors. I agree and disagree in part with the major thrust of her argument which seemed to center on her disdain for self published authors.

Without a shadow of a doubt, self publishing platforms like Amazon’s Kindle, Kobo or Nook to mention a few, have opened the door to many authors to share their work with the world. And some of the self published work I have seen in terms of the writing and illustrations have been top notch. Maybe, she hasn’t seen this quality of self published work or feels threatened by self published authors. She mentioned how she was one of a few children’s book authors in the late eighties who were like rock stars and then the market got flooded by so many people trying to do children’s books in the nineties. This sort of snobbery and arrogance wasn’t nice to see.

On the other hand, and this is where I agree with her, some people (I do hope they are not in the majority) see self publishing as a business opportunity and are flooding the market with books that are sub standard. These type of people really do give self publishing a bad name.

On a personal note, I received the images for the latest Billy and Monster book a couple of days ago. They just weren’t to the standard that my readers have come to expect. So even though, it’s going to mess up my publishing schedule, at this stage in my writing career, I’m more interested in establishing a name than just churning out book after book. One of the other speakers from Booki introduced a new eReader specially designed for kids. It’s a  changing world out there and the consensus was writers and publishers have to embrace the new world of digital without abandoning the old word of paperbacks.

After this I ran back (I tell you there was a lot of running or should I say brisk walking over the 3 days) towards the Children’s center for a talk on blogging. I missed the first seven minutes of this class and didn’t like the fact I could only find a seat at the back. This class opened my eyes to the power of bloggers and their place in the publishing/author’s world. Big publishing houses are looking to send their books to bloggers to review to help create a buzz and also increase awareness of one of their books.

Some of the bloggers on the panel said they had stopped accepting books as they had too much which they hadn’t gotten round to reading and reviewing. I met Jo (one of the bloggers on the panel) and asked her a few questions about approaching bloggers. She said to always include the blogger’s first name when you approach them or else they will think you are bulk mailing to all and sundry. She gave me her card to contact her with regard to Children’s bloggers as she reviews YA (Young Adult) books. I’m happy to say that Jo did come through (after I emailed her a few nights ago) and gave me some UK and Irish based children’s bloggers. Result!

After this I went over to the MLBT (My Little Big Town) stand and met Calvin (the CEO of this publishing house that seem to make books that I would personally endorse) and showed him the Easter story of Billy and Monster. He seemed impressed. 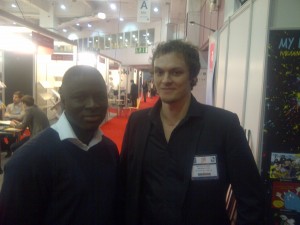 I rushed back to the Children’s Innovation Theater and there was a seminar on PR. The first speaker was from Penguin and she talked about the PR campaign behind ‘The Diary of a Wimpy Kid’ and how they try and maintain brand awareness outside launch periods. The second speaker from Bloomsbury, talked about a Harry Potter campaign they did when the last film was about to be published. They did a campaign that focused on finding people’s favorite Harry Potter character. Through social media and press coverage, the campaign did generate a lot of buzz. When asked, he couldn’t guarantee or state if the campaign had a direct impact on the sales of the Harry Potter books in the stores. My personal opinion is that it cannot hurt to have ‘buzz’ about your book. One way or the other, it really does translate into something positive for the book whether long term or short term. The reality is that some buzz is better than no buzz.

I ended the day in the AuthorLounge and arrived early enough to get a seat for the Q&A with author Nick Spalding who I now follow on Twitter. Nick is such a down to earth guy and I love his honesty and self deprecating humour. He told us of his journey from self publishing to traditional publishing. His books did so well while he was self publishing that he got offered a very lucrative deal by a publisher and he now writes full time. He said he enjoys the commute from his bedroom to his office down the hall. He advised that we shouldn’t get into a mindset of us and them i.e. self publishing vs. traditional publishing but rather that both can co-exist side by side as he’s proven. In the industry, he’s known as a hybrid author as he has books that are traditionally published as well as self published work. This session was chaired by Hayley Radford who is the director of marketing at Authoright.

Immediately after this was a talk by Mark Lefebvre who is the director of self publishing & Author Relations at Kobo. Now I have to admit here that I’ve never uploaded any of my titles on Kobo or any other self publishing platform apart from Kindle. However, Mark made a point that if you’re exclusively publishing on just one platform, then its like telling your fans who are on other platforms that you really don’t care about them. With that in mind, I uploaded two of my non-fiction books on Kobo and after 72 hours (it usually takes 8 hours for me on Kindle), they went live. I have to admit while uploading the book was a breeze, navigating the Kobo writing life platform was not easy to put it mildly. We’ll see how non-fiction sales go on there (Note: It’s now been about 5 days since I published on Kobo and no sales yet. While these books I put on Kobo are non-fiction, I have sold several copies on Amazon in that period).

After this class, I went to one of the conference rooms for a seminar titled ‘How to start a publishing company’…what a waste of time! OK, I take that back. It wasn’t a waste of time but it was not what I was expecting. Prior seminars I had attended had people I felt had been in the trenches and had given their fair share of sweat, blood and tears in their pursuit of publishing success  The panelists at this seminar had a more lecturing style to their presentation with no real world examples. I left about 30 minutes before the seminar ended.

I then had to go to the opposite end of Earls Court, jumped on an escalator to the top floor where decisions that will affect your local bookstore window were being made. The seminar/event was titled The Best of UK children’s books: quickfire presentations on forthcoming titles from 12 leading UK children’s publishers on the official brochure. I got into this seminar about 25 minutes after it had started and being that this was my first time at LBF, I absolutely had no idea what to expect. What happened in this little room was one or two reps from the major publishing houses, I’m talking about Penguin, S&S, Macmillan,  Egmont, Hachette, Bloomsbury to mention a few, had 5 minutes to tell us about 5 or more books in their catalog that were due to be published from summer all the way to November. In the room where book buyers and I imagine folks from the big retail chains who were there to decide what books to stock on their shelves in the run up to Christmas. One perk of this event was the goodies bag at the end. In my bag was a Lemony Snicket book and I’ll start reading it sometime in May.

My big takeaway from Tuesday was that there is this big war raging at the moment: self publishing versus traditional publishing. 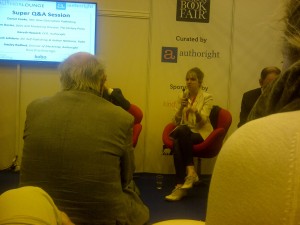 While sales of digital books have been increasing astronomically in the last few years, I believe there’ll always be a place for a physical books. Like Nick Spalding advised, we should embrace both worlds and look for opportunities to share our work on multitude platforms and different formats. I was discussing with a friend recently who was looking to strike a deal with a traditional publishing house but was getting the standard rejection letters that all published authors tend to receive at the start of their careers. Can you imagine the Stephen Kings, J.K. Rowlings, Darren Browns who we will never get to enjoy their works because of a multitude of rejection letters from publishers that killed their passion and desire to get their books published. My advice to her was to go the self publishing route. There was a time when to be considered a self published author was something that was frowned upon and you were looked down on as an author. Not anymore! Many authors have been discovered by big publishing houses due to their success at self publishing. If like my friend, you’re still contemplating if you should self publish, please don’t hesitate. Get your manuscript to the best possible standard. Ensure it is professionally edited. It should have a book cover and title that would stand shoulder to shoulder next to a New York Times best-seller on the shelf at Wal-Mart or Waterstones. And who knows? Self publishing might be your route to getting that offer from a well-known publisher.

The final post on my London Book Fair will come in a couple of days. Watch out for it.

I’d be happy to answer your questions and also hear your comments regarding what I’ve written.

Filed Under: On My Mind
← Win a SIGNED Copy of Billy and the Monster who Loved to Fart
Interview With Children’s Book Author Stuart Reid →