It’s back! Author Interview Thursday is back. And my special guest to open this season is Savannah Grace who was on the hot seat back in August 2013.

Savannah is a travel writer and has visited close to (if not more than) a hundred countries. Her first book ‘Sihpromatum – How I Grew my Boobs in China‘ has more than 250 glowing reviews on Amazon and has featured on several bestseller categories. Her latest book ‘Siphromatum – Backpacks and Bra Straps‘ was released a few days ago. I was privileged to have an Advanced Review Copy and have begun reading it. Like her first book, it’s filled with exotic locations and adventures from various countries. Savannah was so kind to stop by today and answer a few questions of mine. So without further ado, let’s get right to it.

In what country did you find the friendliest people?

I find all of the “est” questions the most difficult. The people in Mongolia really stand out as some of the friendliest people on earth. Despite having so little, they have the biggest heart and happily share everything they can, or more, with others. While I was in Mongolia, I learned that, “There is no word for stranger. Only friends that haven’t met.”

What was the most useful item you bought while travelling?

Replacing my journals when they were full. I can’t think of anything more useful than paper and a pen. Recollection through the written word, is the most insightful and educational.

How does Backpacks and Bra Straps differ from How I Grew My Boobs in China – Your first book? 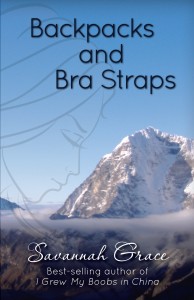 With some experience under our belts, and a real, mutual passion for travel, in “Backpacks and Bra Straps” our travels become more intense and daring than in “I Grew My Boobs in China”. In the first book I focused on the departure and drastic change of leaving our normal lives and how I grew both physically and mentally. Now, there is less whining from me, and I go into more depth on each of the other characters. We venture into more remote lands and see one of the most life changing sights; The sunrising over Mt. Everest. All the while, I stay true to the Sihpromatum series which means “A blessing that initially appears to be a curse”.

What is your top travel tip?

Don’t take things personally and be willing to embrace change and different mentalities, morals and cultures. Travel is a chance to wear someone else’s shoes, and remember that you are in their country.

What part of this book made you very emotional as you recollected what you went through?

Oh, this is a great question. Putting myself back on those many trains and buses, and reliving the emotions I felt as a teenager in such remote lands was sometimes an emotional ride. Homesickness, while looking up at the stars. Or the unforgettable trek through the Himalayas to see Mount Everest.

Haha, camels. They are much more exotic. They both make annoying noises, but camels sound like they come from another planet.

What was the last film you saw?

No joke, “Gone with the Wind”. What a coincidence!!! An absolutely fantastic movie and even better book. Highly, highly recommended.

Tell us of a funny experience you had in this book?

An unexpected funny moment was when my lovestruck brother proposed to a Russian/Kazakh girl he’d met less than 24 hours earlier on a bus.

What can we expect next from Savannah Grace next? 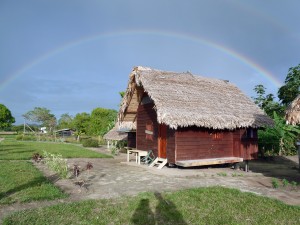 There’s so much more coming. I have so many stories still left to tell. The next instalment “Rusty Tracks and Booby Traps” will cover our steps through The Maldives, Sri Lanka and vibrant, never sleeping India. Staying with a probable drug lord and his 3 wives and 18 children in Afghanistan, an extensive overland journey circumnavigating Africa and submerging myself back into “normal life” and my first romance, are only a few examples of what’s left to come in the Sihpromatum series.

In current time, I am planning to go on a 4-6 month backpacking trip through South East Asia that I will be documenting in depth.

Fantastic! Thanks for sharing with us today Savannah. Please click the link below to get your own copy (as an ebook or paperback) and discover something new about our world through Savannah’s tales.

Grab a copy of Siphromatum – Backpacks and Bra Straps