Hey, it’s Author Interview Thursday (as if you didn’t know) and you are very welcome. If you’re an author or a lover of the written word and looking for a dose of inspiration, insight and/or information, then you’re in the right place. 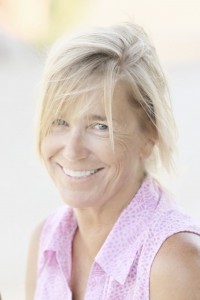 Our featured guest today has rubbed shoulders with some people in high places in the entertainment industry. Her writing background originally started out with screenwriting but I’m so glad she’s branched out into writing children’s books as she brings something fresh to the table. We were both on a Summer giveaway that had a theme of sea life. Her book, Barney and Barry, the Hitchhikers was a worthy addition to the mix.  It was a pleasure getting to know her more in the build up to this interview and I know you’ll find value in what she has to share today. So, would you please join me in welcoming Sharon Powers.

Can you tell us a little bit about yourself and the first time someone complemented you on something you had written.

At this point in my life, I live in both Southern California and Baja, Mexico with my adorable dog, Mia. I have two grown children and I’m also a grandmother. I have an accounting degree and worked as a controller for a manufacturing company, I opened one of the first women’s surf shops in the US and I write a LOT, mostly screenplays. I love the beach and water activities, travel, ballroom dancing, sewing, entertaining, cooking; the list goes on and on. A friend of mind once called me the jack-of-all-trades and the master-of-none.

My ex-husband was the first to compliment me on my writing when I handed him my first completed script. After reading it he said “I wondered what you were doing up there. This is a real story with a beginning, a middle and an end…and it’s really good!” The “up there” he was referring to was our upstairs guestroom.

What can a reader expect when they pick up a book written by Sharon Powers?

Hopefully, something fun and imaginative. I do like adding serious moments, but life can be serious enough and I think entertainment should lift you and take you somewhere else. I never thought I’d write a story with talking sea life, turtle poachers, a sea urchin that sews or even a shark that wears glasses so my mind went to a whole different place for “Barney and Barry, The Hitchhikers”.

What were some of your favourite books as a child?

Interestingly, I was never a big book reader growing up. My parents and sisters sure were. I was ALL about television; “I Love Lucy”, my absolute favourite, anything Lucy did I had to see, “The Carol Burnett Show”, “Gilligan’s Island” and old movies and musicals. I still love visual entertainment and that’s why writing screenplays seemed like a natural for me. My favourite books were about shells and stamps since those were my hobbies as a child.

Can you tell us how your background as a screenwriter influences your approach to writing children’s books? 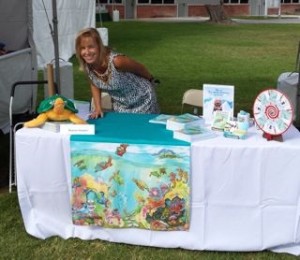 Screenwriting has a very strict story structure in regards to timing purposes, which makes it easy to adapt into a well-paced book. In screenplays, there’s a lot of dialogue, and not much description, so I think the dialogue has to be really clever/sharp. I recently had lunch with the spectacular Jennifer Lee who co-directed and co-wrote “Frozen”. She wrote “Wreck-It-Ralph” and several other animated movies. She told me she doesn’t write for children, per se. She said kids are really smart, so she writes what the story/characters dictate. I thought about that, reflected and realized that’s how I approached “The Hitchhikers” book. The adults love that story, as do children.

What tips do you have for writing good dialogue?

Watch and listen to people. They’re your characters in your stories. Read your dialogue out loud so you can tell if it makes sense and if that’s what the characters would truly say. I had written a conversation between Barney and Barry in my Hitchhikers book and when I read it out loud, I thought Barney would never say that, but Barry would and I switched their conversation around.

Is there a particular book or film that inspires you to be a better writer and why?

Books in general inspire me to be a better writer. There’s always something to learn in regards to how the writer handles description, conversation, pretty much everything since you create the visuals in your mind while reading whereas in movies a whole staff/crew has done that for you. Very different mediums. I liked both the book and movie “Shopgirl” written by Steve Martin, the book “Clan of the Cave Bear” and Viki King’s “How to Write a Movie in 21-Days”. Viki’s book is a great tool for story structure and I bought that book 23 years ago and still use it to this day. “The Intouchables” is a fantastic movie because the screenwriter took a very serious story and managed to write something very uplifting. It’s French and was subtitled.

What tips would you offer other first time children’s authors with regard to working with an illustrator? 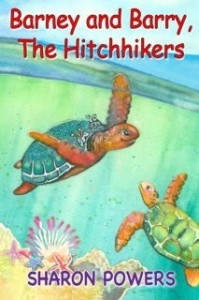 Think about your characters and the feel you want for your story and then look at the illustrators work. I had been at an adult birthday party and Lana McCleary, my illustrator, gifted the birthday ladies with fans. She had hand painted mermaids on each one and they were very whimsical. I immediately thought of her when I wanted art for “Barney and Barry, The Hitchhikers”. She was very open to doing this because it struck a chord within her; she was focused and had some great ideas. She’s also in to “color” which is extremely important for children’s illustrations. Very talented lady. She lives here in Baja, which made it extremely easy for me to meet with her on the project.

Equal. Both are great in their own ways, but I could do without the sequels.

What three things should a first time visitor to Southern California do?

Go to the beach, go to Disneyland, take the ferry to Catalina Island.

What can we expect from Sharon Powers in the next 12 months?

I’m working on the next book in the MySeaBuddies children’s series entitled “Lost and Found” where we’ll meet new characters, like Wink the one-eyed Seagull, and continue with adventures for Fletcher, Barney, Barry and Babs. I also have another fantasy romance screenplay I’m adapting into a novella, “Paved in Gold” and I’m working on animating “Barney and Barry, The Hitchhikers” into a movie. It’s actually a pilot for a television series so this next book is the first couple of episodes from my “bible” for the series. I’ve got some other ideas rolling around in my brain, too.

Where can readers and fans connect with you? 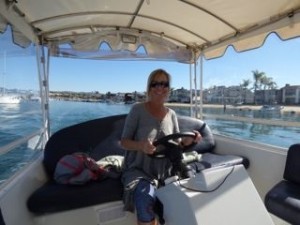 I have a website MySeaBuddies.com, facebook.com/MySeaBuddies, Twitter @MySeaBuddies and I’m on Goodreads, Amazon, Smashwords, Iauthor all as Sharon Powers, author.

Any advice for authors out there who are either just starting out or getting frustrated with the industry?

Write to write. Write because you love it. Write what’s in your heart and soul. Whether you are writing a book or a screenplay, competition is serious. There are as many unsold scripts as unemployed/undiscovered actors. It’s extremely difficult to get an agent or a publisher. Just keep chipping away at all the different social mediums to get yourself and your book known. Self-publishing is a fantastic way to have an actual end-product for your efforts, but the end is never the end unless you let it be so, once again, keep chipping away to promote yourself and keep writing.

Its been an absolute pleasure having you today Sharon. You’ve ended so perfectly by encouraging us to write because we love it. I also love the fact you believe we should write what’s in our heart and soul and not what the bestseller lists dictate. Do make sure to connect with Sharon on social media and grab her books for a loved one this Christmas. We’d love to hear from you so leave a comment or question and as always, share our interview using the social media buttons below.