Book Review – A Life for a Life by Tim Ellis

Sometimes, you pick up a book and you don’t get hooked till a few pages or chapters in. 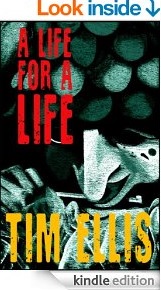 Most times, (I suspect like most people), I don’t have the patience to discover this ‘hook’ if it’s not present in the first few pages. A Life for a Life got me hooked in the first few sentences!

Straight away, you’re made aware that the first character we’re introduced to is going to shortly meet his demise. It’s cold. It’s calculated. And it happens in an instant.

We soon get introduced to the main characters in this series – Detective Sergeant Jed Parish and PC Mary Richards. Jed is in his late thirties while Mary is in her early twenties. They have a wonderful relationship that’s almost akin (in my opinion) to a big brother and his little sister as opposed to a Police Detective and a new recruit. What makes their relationship work so well is the banter that flows between them. Richards (as Jed Parish chooses to refer to her) is not afraid to point out Jed’s poor social and health choices. Parish is not afraid to remind Richards whose Boss. It’s this mutual respect/disdain that they have for each other plus their shortcomings that I found compelling and drew me into the story.

It becomes obvious very soon that we’re dealing with a serial killer. Tim Ellis goes against the grain of most mystery/crime thrillers where the reader is presented with several suspects and has to work with the protagonist(s) to figure out the perpetrator of the heinous crime. I’m struggling not to give too much away but you’ll agonise with Parish and Richards as they struggle to link the dots and capture the killer who seems to have an established pattern associated with every murder. There’s something about the murders that make you empathise with the killer as the story plays out. This killer is on a mission and we get to know what it is in the final denouement.

The sub-plot that runs alongside the main murder story is Jed’s love life. There’s a scene that occurs between Jed Parish and a PA at the local council that completely took me by surprise. This Jed Parish guy is human.

So what did I not like about this book. While I loved the chemistry between Richards and Parish and feel it’s one of the factors that makes this book a winner, on a few occasions, I think it strayed into the realm of ‘Really?’ Sometimes Richards came across as an emotional, naïve, little girl who wanted her way or she’d throw all her toys out of the pram. Maybe its this naivety that endears Richards to Parish. Maybe its this innocence that’ll have you rooting for her. Still, it made me stop reading the book now and then and ask the question, “Really?” Please let this not stop you from picking up this book. It’s set in London and it really gives you a feel for the local banter common to people who live in and around London.

The final climax was worth the wait and ties everything beautifully together.

I understand there are now more than 10 books in this series and I can only imagine it gets better with each episode. Grab a copy today as I believe you’ll enjoy the ride.

A Life for a Life on Amazon