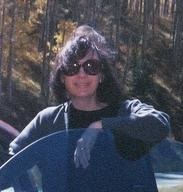 Today’s special guest reached out to me after reading an AIT special earlier this year and I’m so glad she did. She has a background in journalism and runs several blogs on topics dear to her heart. She’s written two paranormal Mystery novels and has other titles in the works. In liaising with her as I prepared for this interview, I have to say, that I have been inspired by her passion for the writing craft as well as her transparency. We really do have someone special in our midst today, so please join me in welcoming GG Collins.

Can you tell us a little bit about yourself and something most people don’t know about G.G. Collins?

My friends know this, but it’s not general knowledge. People shouldn’t call me before 10 a.m., 11 is better. What my friends know is that I stay up quite late to write and therefore sleep in the mornings. Early calls usually find me incoherent and muttering swearwords. As one might gather, I dislike mornings, but also Brussels sprouts and clouds. On the up side, I love travelling (even on a bad day). Sunshine and chiles improve my mood greatly. I continue to report and write for my blogs. I have two. Can’t ever have too many blogs. They are reluctantmediumatlarge.wordpress.com my book blog and paralleluniverseatlarge.wordpress.com a news, views and reviews blog. You can also find me on Twitter @GGCollinsAuthor. There is a rap star by the same name so “Author” had to be added for clarification.

Tell us about the first time someone complemented you on something you had written? 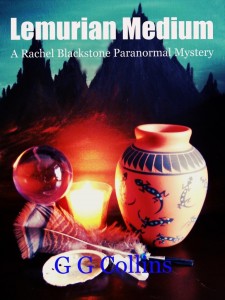 The first time one of my stories was chosen as the cover. My editor told me it was good work. I beamed all the way to my car. It’s difficult to beat that first time.

You have published two books in the ‘Rachel Blackstone Paranormal Mysteries’ series. Was it a conscious decision to write a series and what led you to do it?

No, I didn’t have a series in mind. I learned of the Native American ritual to return the dead and all I could think about was what if the wrong spirit returned? By the time I finished the book, I just didn’t want to let these characters go. I am writing a stand-alone book too, but I like my Reluctant Medium, Rachel Blackstone. Long may her cynicism live.

What key ingredients should a good crime/mystery book possess?

My books are paranormal mysteries so I have more latitude than pure crime writers do. I begin my story where it starts, usually in the first line. At that moment, something is going very wrong. The mystery unfolds a little at a time as new elements (some supernatural) present themselves and up the ante.  Periodically the threat level heightens or the need for action revs up. It’s a delicate balance. You don’t want to reveal too much, too soon, but there has to be enough mystery to keep readers interested. I enjoy putting Rachel through as much mayhem as she can stand. If I go too far, I have to let her have a mental health day. 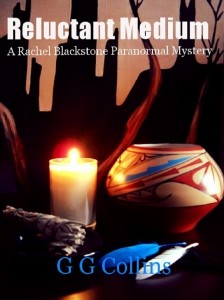 Unnatural or pretentious lines (unless your character is a pompous gadfly) should be avoided. We usually don’t speak that way in conversation. Each character should have a consistent voice. If you’ve been away from your manuscript for awhile, this is especially important. Find that voice again. Be careful using contemporary vernacular. It might shorten the shelf life of your book. Stay away from phrases like: “don’t you know,”  “she goes” and “awesome” unless this is specific to one character.

My stories are dialogue-driven and I enjoy letting my characters go. Rachel has a big mouth. She’s sardonic and quick, but can make a complete fool of herself around men. Chloe is her best friend and is usually more diplomatic—but she does occasionally curse in French. Like most of us, I’ve met many of these characters in everyday life. Whenever I have trouble finding someone’s voice, I think back to a person I’ve run across who was this type. Here’s where even the nastiest person you’ve ever met can pay off. Make them a character! Get even!

I’m a fan of Chris Haddock’s Canadian TV shows such as “DaVinci’s Inquest” and “Intelligence.” His stories have realistic dialogue. His characters feel authentic. The dialogue is much like that you or I have with friends and co-workers. There’s a BBC show called “Last Tango in Halifax” that is a hoot! All because of cleverly penned dialogue and superb delivery. In American TV, I like the writing in “Longmire,” thanks to the influence of Craig Johnson, the writer of the popular series. “Supernatural” has some fine writing. They kind of slip it in between the demons and the vamps, but it’s there. That’s why they’re in their 10th season. The cute guys don’t hurt, but it’s the substantive writing that knocks me out. Someone on the writing staff has insightful views about hope and things we can’t understand. In books, I find mystery writers Lia Matera and Edna Buchanan refreshing. Wit is always a good thing, but smart wit is tremendous.

How do you handle bad reviews?

Most people are kind in their reviews, but occasionally one is not helpful and just plain mean-spirited. In this instance, we book writers have to realize that it’s not us. The unkind words have more to do with the person who wrote the review and what kind of life, or day, they’ve had. These go into File 13 where they belong. Some writers have had bad experiences with what is referred to as a troll, people who go from place to place on the internet spreading vile prose with limited vocabulary and issues with sentence structure. If I should ever get one of those, just know I have a very thick skin. Most of my reviews have been complimentary and readers enjoyed my books. Of course, this makes me happy. The Rachel Blackstone Paranormal Mystery Series is supposed to be fun—and maybe a bit scary. But writers must realize that not everyone likes the same thing. That’s okay.

(Laughing.) I’ve seen neither so I really can’t comment. I saw “WALL-E” twice.

As a journalist, can you give us tips on how to make people ‘spill the beans’ in an interview situation? 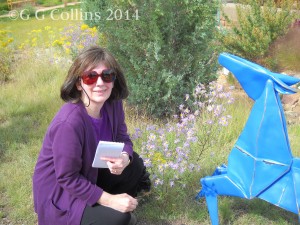 Everyone has seen this done on a news show. A journalist asks a question, the person being interviewed says something short like “yes” or “no.” When nothing more is forthcoming, the reporter sits there quietly, the seconds tick by with dead air, the person can’t take it any more and out it spills. Another “technique” is to phrase a question in this way: “Some people might say . . . you’re a tyrant” or “you’re a crook.”  How would you reply to this accusation?” This way, the reporter is afforded some distance, but still gets the answer needed for the story. Personally, I’m not comfortable doing this, but they can be an effective tools, particularly in hard news. And that may be why I’ve covered primarily arts, health and personal stories. I’ve found that being truly interested in what your interview is saying goes a long way to crafting a good story. Once I ask the first question, there is nothing in the world but the person sitting in front of me.

What is the worst thing a person can say or do to a journalist?

Lie. You don’t have to be a journalist to detect a lie. Most anyone can do it. But in reporting we come to depend on our regular sources. If someone lies, and we know it, that could become the story. And they’ll likely never be asked for another interview. Word gets around.

What three things should a first time visitor to your hometown do?

Bask in Santa Fe’s Plaza and people watch. Eat at The Shed; it’s my favorite restaurant and my characters too. It’s family owned, has great New Mexican dishes and yummy margaritas. Take the short drive up the ski basin road (Artist Road which becomes Hyde Park Road) for the breathtaking views. And eat the chiles. Oops, I think that was four.

Can you tell us a bit about a book you’re currently working on?

Oh sure, that would be “Atomic Medium.” In this story, Rachel Blackstone must go back in time to 1945. Two evil men have slipped through a portal at a local retail shop, once the office of The Manhattan Project. If they succeed in their diabolical plan, it could change the outcome of WWII. It’s no small thing for Rachel and Chloe; just save the world. 2015 marks the 70th anniversary of the atomic bomb, which was developed in Los Alamos, just north of Santa Fe.

Any advice for authors out there who are either just starting out or getting frustrated with the industry?

I have worked for a book publisher and while there can be some advantages to publication by a book house, there are also some drawbacks. If your book isn’t one of the chosen to get tight promotional dollars, you will likely do as much marketing and promoting with a publisher as you would going the indie route. I opted to self-publish and haven’t looked back. If you have found yourself knocking on publishers’ doors and getting nowhere, try going indie. It’s a terrific creative experience, even if you eventually go with the bricks and mortar publisher. Have a presence on the internet so an interested editor can see what you can do. Start blogging and be sure to take advantage of author pages on Amazon, Goodreads, Shelfari, Ask David and Book Goodies. With a little experience, you’ll determine which work best for you and your book. I recently joined Twitter and now I can’t believe I was reluctant to do so. It’s fun and you get great exposure. But don’t constantly urge people to buy your books. Get involved in what’s going on and reply or retweet others. You’ll make friends quickly. Avoid spending so much time marketing that you stop writing. The more books you have out, the more sales you’ll rack up.

Thanks for all the wonderful advice and letting us into your world GG. I’ll personally be revisiting this page in the days and weeks ahead to feast on your wise words. GG and I would really appreciate your questions and comments, so do drop a line or two in the comments section below. Be sure to share this interview using the Social Media buttons and you can grab one of GG’s books at the link below.